My journey through the 1001 beers to try before you die book. Which ironically might kill me!

Michelle and I took the train across from Oslo to Stockholm and it was a great journey. We discovered maybe the greatest snacks we have ever tasted… 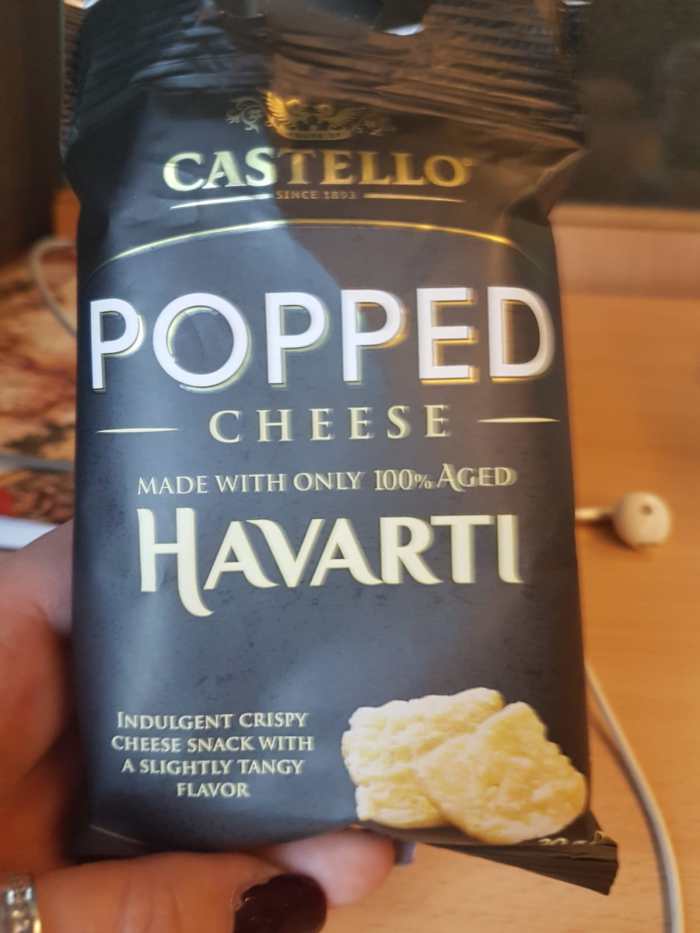 Popped Cheese is amazing, they are like crisps but 100% cheese with so much flavour. I have never seen them before, nor have I seen them since, but if you see them I implore you to try them.

They are perfect with a train beer, and luckily for me I had picked one of my list up from a Norwegian Supermarket.

Beer No.255 Elephant Beer by Carlsberg was first brewed in 1955 for the Gold Coast market as they seem to have a taste for a stronger beer down there with Guiness Foreign Extra Stout doing so well. This 7.2% strong lager did very well and earned the nickname Elephant (its original name was simply Carlsberg Export which is a completely different drink in it’s own right now). It wasn’t long till it was released domestically (1959) and went through an official name change to Elephant. I found it OK when I was eating as I had it with a strong flavoured Bonfrikadeller wrap, but by itself that extra couple of percent comes out and sends it into that familiar horrible strong lager world.

When we got to Stockholm is was already dark. So we made our way to our hotel then decided to have a relative quiet one and go to whatever was our local pub.

Man In The Moon may call itself a Gastropub but they clearly just nicked the word from England because they thought it sounded good.

Inside it was a pub, not a Gastropub but a beer pub, their selection was excellent with plenty of bottles and 30 taps. Enough for any bar to look on enviously. 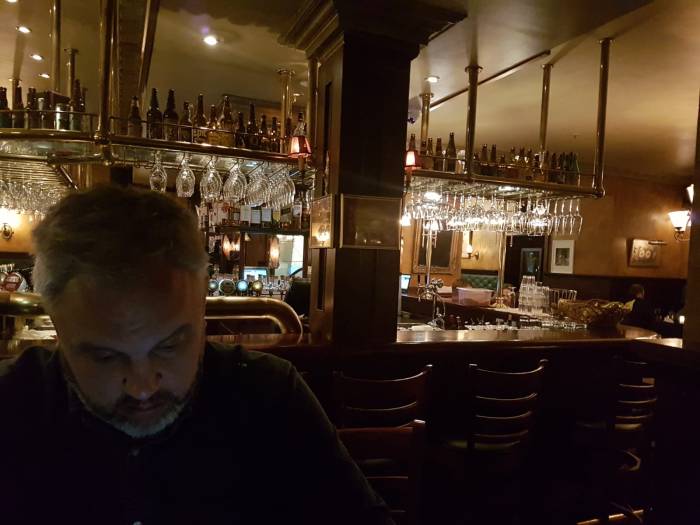 It didn’t take me long to find the first Swedish beer I needed from my list. When I’m beer hunting there is a few things that makes the beer find that little better. If you can find the beer in it’s own country, and secondly if you can find it on draught. My first beer was exactly that. No.256 Pickla Pils by Nynashamns Angsbryggeri, is a lovely pilsner first brewed by three home-brewing lads not far from Stockholm in 2000. I found it smooth with a little pepper and very drinkable. 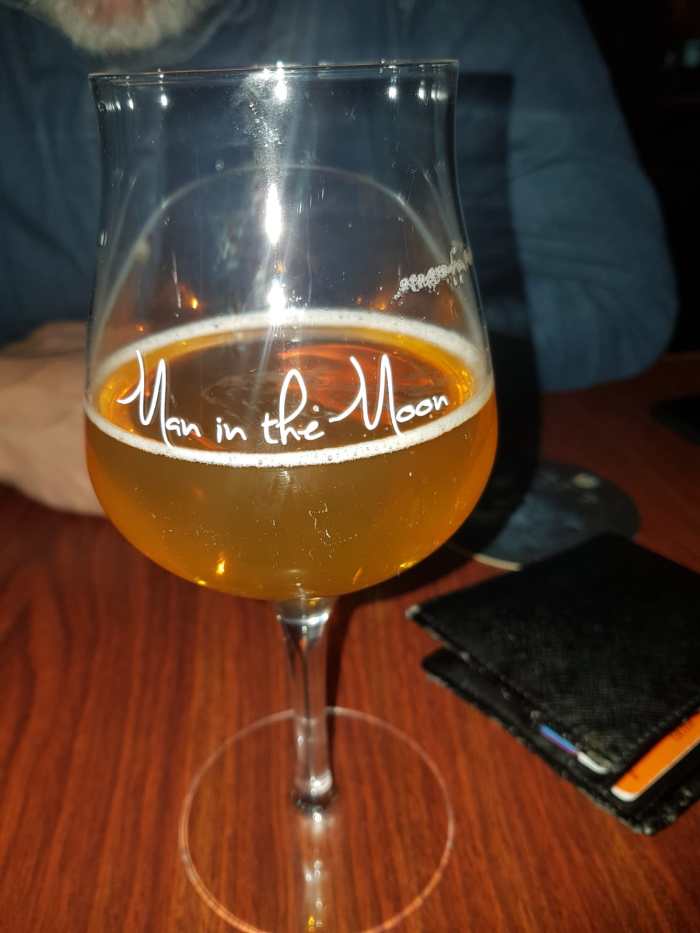 I followed that up with my first from maybe the most respected Swedish brewery Nils Oscar. Of the seven beers listed as beers to try before I die in Sweden, Nils Oscar produce four of them. The first one I tried No.257 is the modestly titled God Lager.

Really of course God is Swedish for Good, so they don’t hold their beer to heavenly but calling your beverage “good lager” sounds more cash n carry. Its definitely not though, its a lovely Viennese  lager made with German hops which carries a fresh, clean and crisp taste all the way from beginning to finish.

After we finished about 6 of those each we decided to stumble back to the hotel. There the good lager took hold…

But hey we were on holiday so we managed to fit one more beer in. It was one I picked up in a shop on the way back which was actually Danish but we couldn’t find in Denmark.

No.258 Jacobsen Saaz Blonde is a Belgian style blonde ale made with one my favourite hops, the Czech Saaz. Husbryggeriet Jacobsen is the experimental side to the massive Carlsberg brewery. Its tropical, piney, hoppy dry. It is also very drinkable for a 7.1% beer but that may well be because I was already nicely lubricated.

The next fuzzy morning we took it easy and ate as much as possible, and by late afternoon we were ready to go out exploring again. 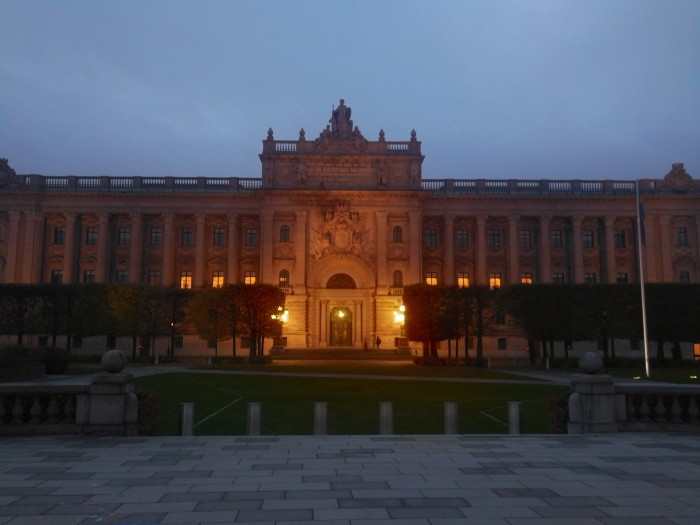 Stockholm is a beautiful city with fantastic architecture. It stretches over 14 islands and is home to around a million people. The old town is set on a small island called Gamla Stan, with the the main town spread over both banks of the river, one bank appearing to be more shopping centres and train stations. The other full of bars and clubs, you can guess where we were heading!

We started in a bar called Zum Franiskaner. Its in the style of a German beer hall, I think anyway! it reminded me of a theatre in the 1930s. I could imagine having a pre show dinner being interrupted by an air raid siren. Oh and I’ve never seen so many light bulbs! 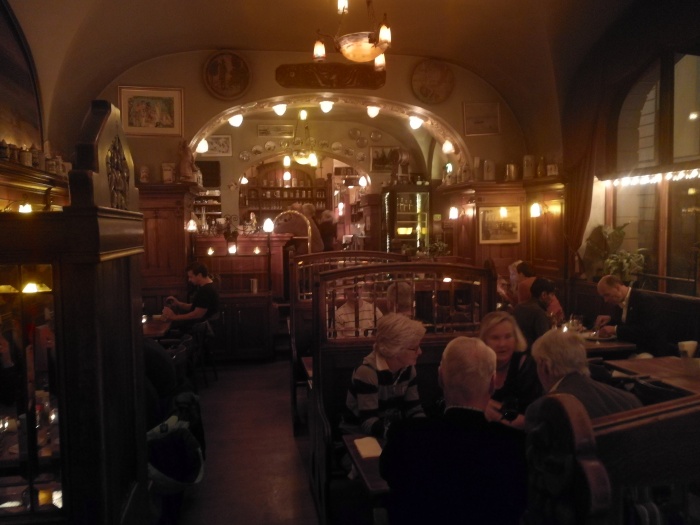 The first beer we got was from our new favourite Nils Oscar. A smoked beechwood porter with that flavour of bacon that we are still trying to get used to. The name of it, Rokporter translates to mean smoked porter, it was first brewed in 2007 and is readily available across Sweden, much more so than any smoked porter in England.

We followed that up with a Dunkel from Konig Ludwig. This beer has been around quite a bit longer, having been first brewed in 1976. It also feels more suited to this pub, being from Germany. This dark lager, which accounts for nearly half of all dark lagers sold is clean, crisp yet with quite complex full flavoured finish. It’s a good beer that harks back to the 1920s when dark lagers were the most popular beer.

There was another beer from my list from Konig Ludwig available in the Franiskaner which is one of their wheat beers. The Weissbier Hell is another beer first brewed in the seventies. We thought it tasted like water with a hint of banana. It was a little bit creamy but we thought it didn’t have much about it due to it’s lack of flavour.

After finishing we made our way to Omnipollo’s taproom, Omnipollo’s Hat. I don’t need any of their beers for my 1001 but I love their beers so I was excited to see their taproom, and I wasn’t disappointed. 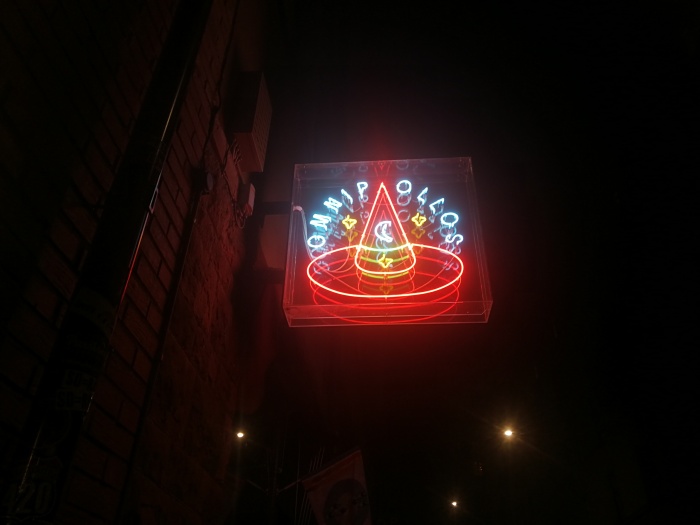 The had a really friendly barman, good looking pizzas and a beer called Brush which was 12% Imperial Porter made with Vanilla Beans, Cocoa Nibs, Hazelnut Coffee and Ancho Chillis. Sounds interesting? Well bring your wallet, it was 119 krona for 20cl which works out to be £30 a pint!!!! I’m used to paying extra for craft beer and I am all for it. Wines, whiskys, vodkas, nearly every alcoholic drink available has expensive versions due to their age, process of creation or brand positioning. When it comes to be however people baulk at anything over what they are used to, some even get angry as proved by The Rake when they had the temerity to charge £10 a pint in London. 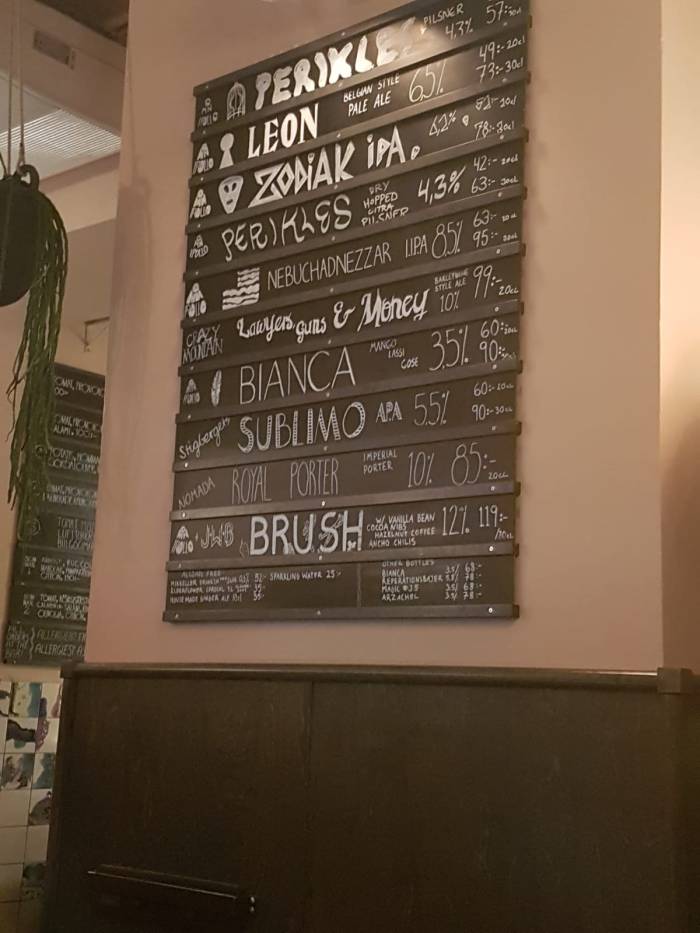 I think it’s ridiculous that people should expect to pay the same amount for a 12% beer that is created with all those ingredients mentioned, sometimes aged in bourbon or burgundy barrels for years and brought over from a tiny brewery in San Diego for example as a pint of mass produced lager which is brewed by the millions of gallons and is constantly working towards in cutting the prices of ingredients just to make a cheaper pint. The most expensive of most alcoholic beverages (for example Pappy van Winkle) is held in great regard yet if beer moves above the £5 line its viewed with contempt. I just don’t understand it.

Still £30 a pint is a bit much, especially when Michelle decides its her favourite drink of the holiday and she wants another! 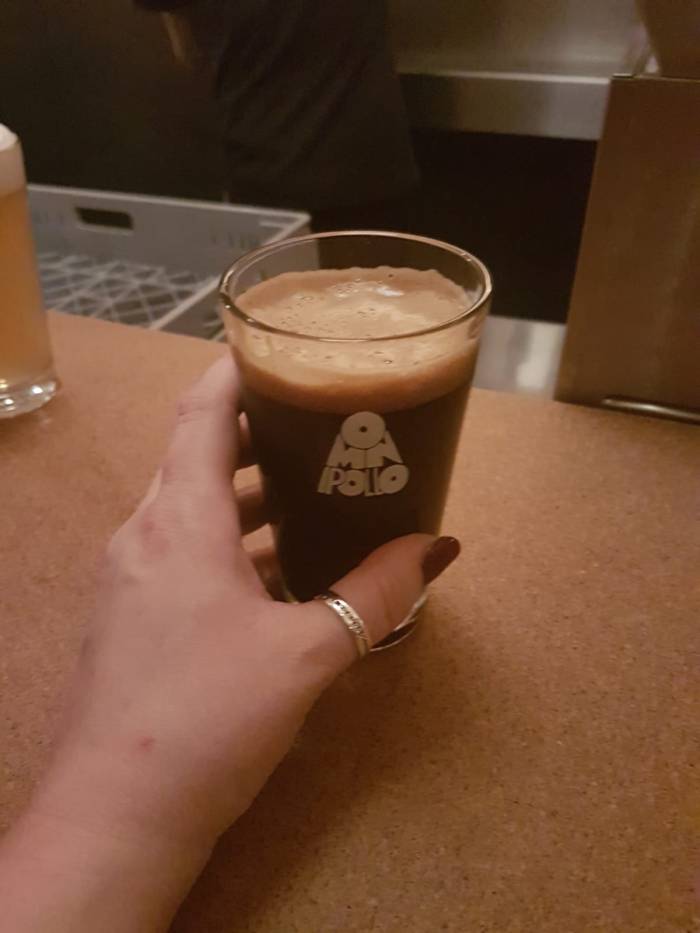 The mango lassi gose called Bianca is presented with a hip trick, The run off head is poured from the drip tray straight into a slushy machine and turned into practically ice cream. 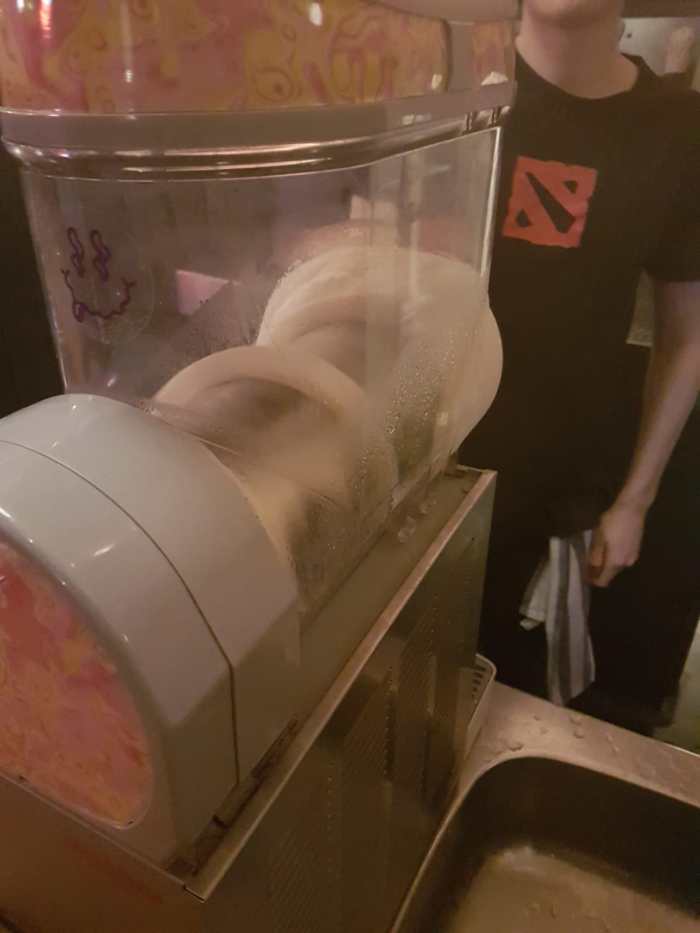 Its then put back on the top of the poured drink and looks sensational. Not only that but of course it also adds an ice cold head that keeps your drink cold all the way down. Not that that’s top of your list of priorities in Sweden! 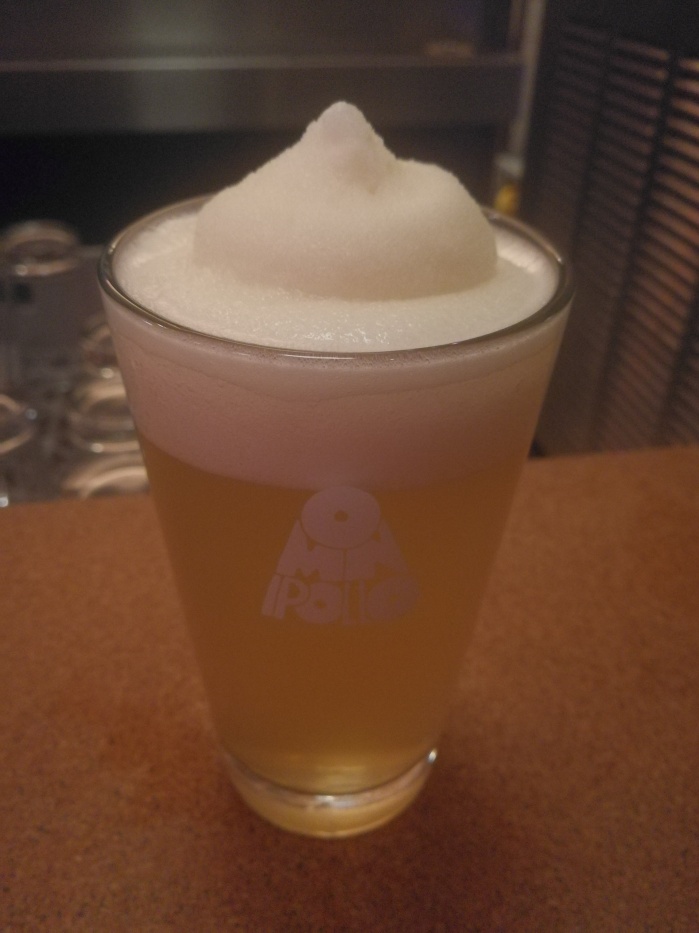 The south side of the city, has quite a few cool bars and the next one, the very English sounding Oliver Twist Pub was close by. Now I know we have discussed pricing earlier but they had Samuel Smiths Utopia there, I need it for my list, and I really regret not getting it, but at over £200 a bottle, yes you read that right £200, I just couldn’t justify buying one at the time. I do regret it though as I’m not sure I’ll see another one, unless I make a trip to Boston that is!

Instead I settled for a pint of the far more available No.262 Victory Prima Pils. A pint of Pilsner is about as far from the 26% Samuel Adams offering you can get really. saying that it’s a great Pilsner and lager is definitely one of my favourite styles. This example is full flavoured, smooth with a little bitter bite. The head split and turned into an unappealing  cream consistency but that may well be down to glass care. 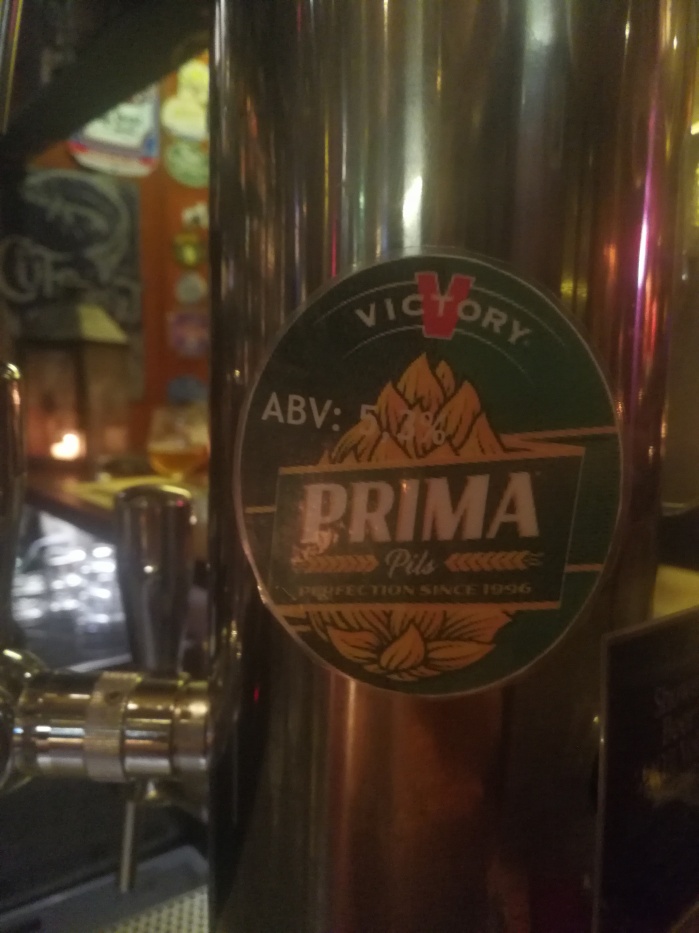 Finally we went to Akkurat, which is world famous for choice of whisky as well as beer.

I have never seen a better menu, it was incredible, not only was their countless styles and brands but so many vintages too, it was astounding.

Obviously I found a few beers I wanted starting with our old friend Nils Oscar. Their  Imperial Stout comes in at a very modest 7%. This critically acclaimed beer reintroduced the style to Scandinavia after it dropped from fashion a hundred years ago. It’s a lovely beer, roasty, fruity and well deserving of all its awards.

My last beer in the bar and my last beer in Sweden was quite a special one.  No.264 D.Carnegie & Co. Porter has been around since 1836. According to the very knowledgeable barman it is the original Baltic Porter and also Sweden’s first registered trademark. It’s a great beer, sweet, irony with a big off white head. It’s quite thin but has plenty of subtle dark undertones.

So that’s it, that was Sweden and the end of my Scandinavian adventure. It was happy accident that the last beer I had is so steeped in Swedish history yet is owned by a company based in Copenhagen (Carlsberg) which is where our journey began.

Scandinavia is great, clean, affluent and very friendly. I’d recommend it to all just don’t forget your wallet!