Merry Christmas and a Happy New Year everyone. Bloody hell doesn’t that seem like an age ago already. I can’t believe New Years eve was less than three weeks ago, I think it just starts so early nowadays that by the time it comes around it seems like it’s already over if you know what I mean.

Anyway blah, blah, blah. Its been yonks since I last wrote a blog and so much has happened. I started my new job at The Craft Beer Co. and I’m glad to say I love it. It’s a great little pub in Limehouse with a really cool, friendly clientele and obviously an unbelievably good selection of beers. I would recommend anyone coming to pay a visit and I’m not just saying that to see me! It’s directly opposite the train station and has just got a really nice vibe, and of course impeccable service. 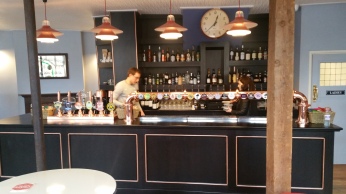 There’s certainly better pictures of it out there but you get the idea.

For our training we went to a couple of breweries. We went to the Kernel brewery in Bermondsey who make the Export Stout I reviewed (if you can call it that) in a previous blog. It was quite a big affair with everyone who worked there being beautiful girls or wooly hatted bearded hipsters looked over by a Glastonburyesque tied died public school bloke. You know the sort. It was all very hip but something about it seemed a bit self aware.

But then we went to something that really oozed effortless cool. The Partizan Brewery just down the road was as sexy as hell. It was just one lot under the railway arches, a bit like Kernel but much much smaller. They made their own beer in this one little room and had even constructed a little bar with 6 taps to sample their wares. The brewer was very welcoming and super natty. I loved it there. 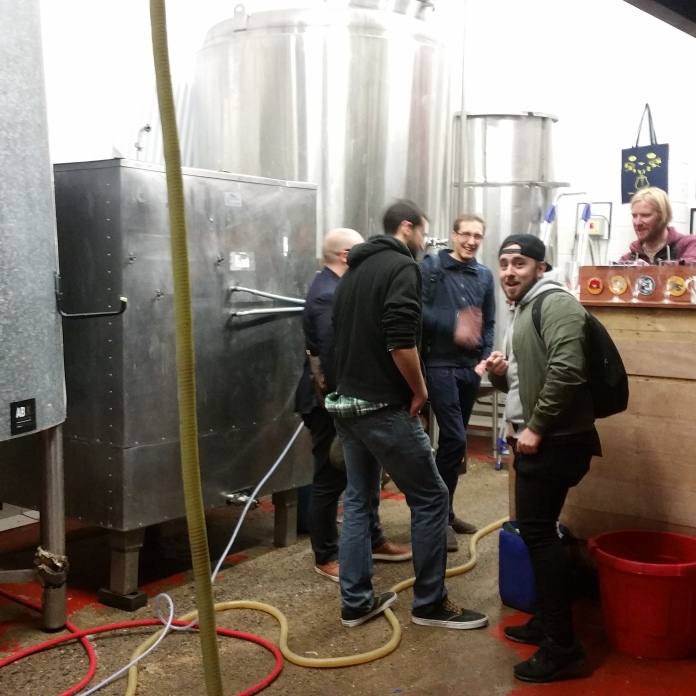 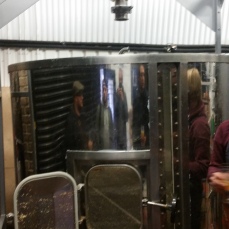 The brewer is the blonde haired bloke on the side not the doofus in the cap whom I work with.

It was a great introduction to such a small, exciting and vibrant scene. We had a preview night and many of the brewers including those from Partizan and Kernel came down. The owner of Beavertown came down too who just so happens to be Robert Plant’s son!

The first couple of beers on my list were no way connected to work though, I picked them up from Marks and Sparkles when I was doing my Christmas shopping in Bluewater. 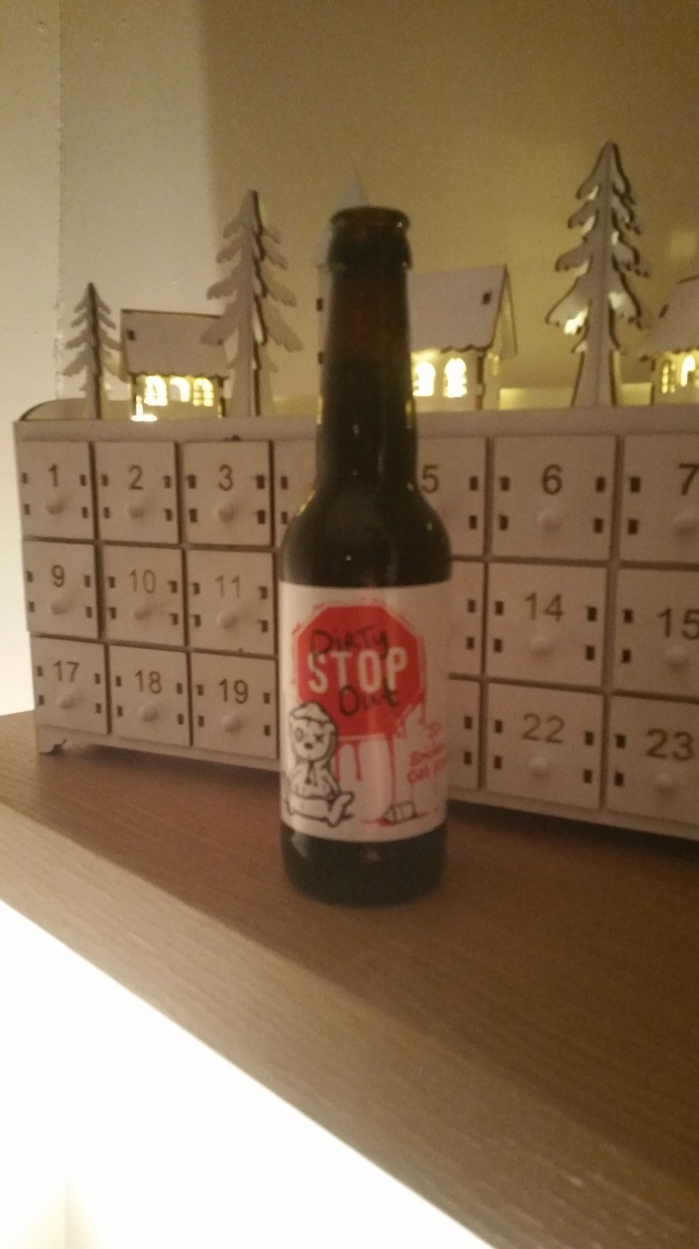 Dirty Stopout is a rarely made stout by those in demand Welsh boys Tiny Rebel. It has 9 different malts with some dry hopping making this complex beer and it’s worth it. It’s a lovely drop. Tiny Rebel are really doing some great stuff at the moment. Someone said to me that Brewers are judged on consistency and from what I have tasted from these chaps they consistently knock the ball out the park. Cwtch is obviously a great beer but try Clwb Tropicana too. It’s a taste explosion and available on draught from your local Craft Beer Co. outlet. 😉

The last beer I picked up from M&S was Gonzo Imperial Porter.

After I went on my brewery tour with work we visited a few of our sister pubs. In the covent garden bar I found a bottle of Cantillon Iris.

We were joined by Tom Cadden, who is the Operations Manager at The Craft Beer Co. He is the one on the far left, not the doofus in the cap whom I work with.

Tom has got very good pedigree. He was Brewdogs first ever customer and has invoice 001 from them for some Punk IPA he got for his pub. He is now paid vast amounts for his beer tasting skills and is in high demand from all the brewers. I thought it was a perfect time for me to ask him for his tasting notes on the Cantillon Iris and they were obviously far superior to anything I was going to think of! He first informed me straight from his fountain of knowledge that it is the only Lambic that is made without wheat and is dry hopped so it isn’t actually a Lambic at all.

He remarked the smell was of lemon, grapes and horse blanket(!) Whilst the taste was reminiscent of walking through a Romanian field then face planting into a citrus fruit bowl.

A whole other level from my “nice but a bit marmitey” reviews but hey ho. He said a lot more and I feel I’m not doing him justice but I was a bit merry by then and didn’t write everything down.

More locally I went to The Broker to watch the football. When it finished I popped over to Costcutter to pick up a couple of takeaways and lo and behold there were a couple beers I needed.

Combined Harvest is a lovely Amber from Batemans Brewery. It is a gold medal winner from the International Beer Awards and unlike any other beer I have tasted. It has a great nose, and it’s use of oats, rye, wheat and barley (hence it’s name) gives a lively bouncey mouthfeel with bubblegum coming to the fore.

Dorothy Goodbody’s Wholesome Stout made by former Guiness brewer Peter Amos’ Wye Valley Brewery is a nice, dark and, though it sounds funny to say, very stouty. God I am a million miles away from Tom’s tasting notes aren’t I?! Very stouty, ha ha, don’t quit the day job. It’s a great beer though and did pick up the 2002 Champion Winter Beer of Britain Award.

It was pretty good and had some interesting Belgian, Brewdog and American beers. It was a nice variety of cans and bottles and came with a lovely glass. It only had one beer I needed at this stage of my journey (plenty if I had just started). That was Evil Twin Hipster Ale.

Evil Twin are a funny old lot, the make some really interesting beers, their forte seeming to be the super strong dark stuff like Yin and Even More Jesus. The brewery was created in Denmark by the brother of the even more famous Mikkeller. But now after moving to the states I have a feeling Evil Twin may be suppassing his brother in terms of recognition and and certainly excitement. Thats what Evil Twin seems to thrive on, excitement. Quirky names like “Christmas Eve at a New York City Hotel Room” for their Imperial Stout has definitely created  a buzz. Hipster Ale isn’t quite as out there but it’s still bursting with flavour and a bloody good drink. If you see any Evil Twin out there have a taste, you don’t know what you’re gonna get but it’s always impressive, if from a technical aspect alone.

Finally, my old mate Ad Rads who I miss dearly paid a visit from his new home Japan over Christmas. I had spoke to him a few times before he came back and he really enjoyed hunting a few beers down for me. He said it reminded him of his record buying days which was a really nice way to put it as I feel the same. He very graciously brought me back 3 beers to try. One was a Hitachino Nest Dai Dai Ale which even though it wasn’t on my list was actually my favourite of the three. It was very refreshing and pleasant, no doubt lovely on a hot day, unfortunately I was drinking it January but it was still great.

Rising Sun Pale Ale is made by an American who created Baird Beer in a small fishing town called Numazu. It certainly tastes American and that is, of course, because of the use of West Coast hops. For me it tasted like marijuana and nettles. I wasn’t that keen on it (sorry Ads) and with so much competition with these beers it didn’t have any distinguishing features.

Echigo Stout is made by Japan’s first microbrewery. It stems from a brewpub that I would love to go to visit. The beer itself has an OXO personality with a little copper thrown in. It has a licourice bitter sweet taste that goes quickly.

All in all some interesting beers from Japan but ironically by far the best one was the one that was included on my list.

OK thats all for now. Thanks for reading anyone who’s made it this far. Give us a like and all that just so I know you are there!!