My friend Dan and I took a trip to the Meantime Brewery in Greenwich. On the way up I had a great walk. I got off the train at Limehouse and strolled along the Thames. The interesting thing is that as it’s the Isle Of Dogs and Canary Wharf it’s full of million pound apartments and flash cars. Yet at the same time it’s still Tower Hamlets so it’s well rough. I have seen this mix many times in London, especially with the regeneration the overground brings, but this was the most apparent. It felt like The Wire set in Manhattan. It was a great walk, I loved every step of it. Particularly the Greenwich foot tunnel which I didn’t even know existed, through to the Cutty Sark. The real Cutty Sark, not some dank boozer on the corner with green walls and brown carpet called the Cutty Sark, but the actual turn of the century clipper The Cutty Sark. I love London. I don’t go there enough.

The Meantime Brewery itself is situated just a short stroll from Greenwich station, or Belushi’s which is where I met Dan.

It’s super cool. Everything shiny and new with hip young people working there. I must say  it was probably the best tour I have been on, and I would recommend anyone to go on it. Our guide was charismatic, interesting and engaging. We started in the tasting room which was a change to all other tours I have been on where we taste last, and I thought that it worked really well doing that way round. It gave our guide a chance to convey a little knowledge not just on the history of Meantime but the history of brewing in general.

After the tour I purchased three beers off the list.

Meantime London Stout was my favourite of the three Meantime offerings. It’s a lot thinner than a lot of stouts I have tried before but that is not a bad think. I got the taste of raspberries in there somewhere, along side the usual coffee, chocolate and vanilla that is synonymous with stouts.

Meantime London Porter. A recreation of a 1750s recipe first brewed 250 years later this a reasonably strong complex beer with lots going on. I liked all the Meantime beers I have tried and this was no exception. A little bit of fruit and chocolate with some chargrilled tones coming from somewhere this porter makes it clear to see why the style was so popular all those years back.

Meantime Coffee Porter. The coffee aspect to this drink is not simply a marketing ploy, it really does contain fair trade Rwandan coffee beans. They work really well. Its easy to get very quickly accustomed to these new flavours beer, especially coffee and chocolate dark beers, and they already seem just part of the range. It was good but you couldn’t have too many. An enjoyable sipper.

On the way back to the station we stopped off at a pub called The Lost Hour. There I had a pint of Brewdog Punk IPA. 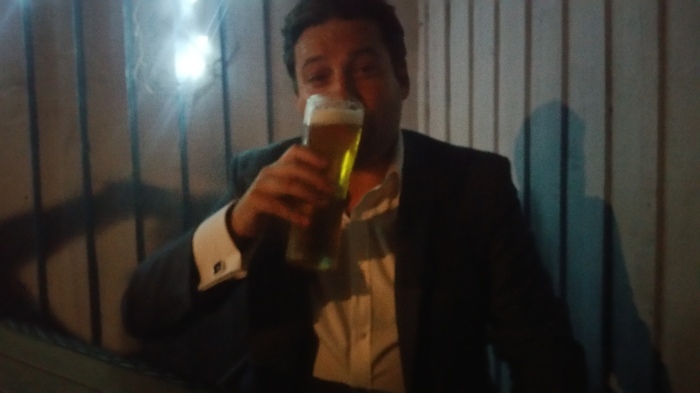 I have obviously had this beer many times before, I have even got shares in their company but I thought I should get one to cross it off my list.

Brewdog Punk IPA is a bit of an icon. I first came across it whilst working at the Golden Fleece as they had it on tap and people would travel to the pub just to get a pint of it. This is the craft beer everybody knows. With their modern stylings I think lots of brewers, beavertown,etc, have either been influenced or benefitted from Brewdogs popularity. As a beer it is very floral and hoppy. Very american looking and tasting it packs a punch and is very refreshing.